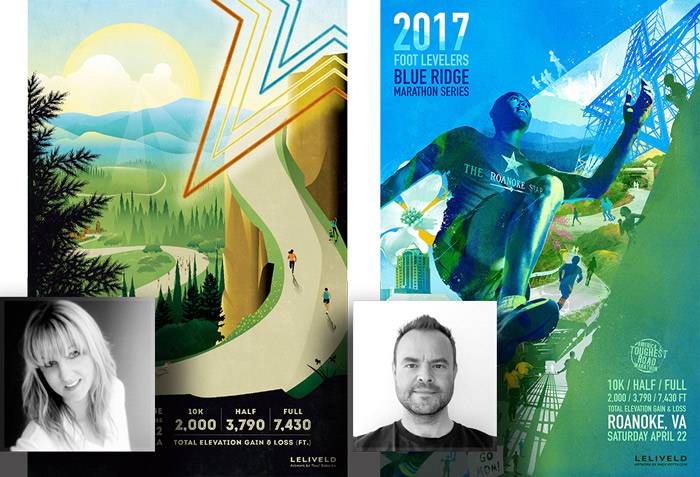 Prints will be available at Fleet Feet Sports starting April 12th as well as the Race Expo and Finish Festival on April 21 and 22.

ROANOKE, VA – A pair of artists have put their spin on the iconic imagery of the Foot Levelers Blue Ridge Marathon with original prints that will be available for sale on race weekend.

Seattle-based artist Traci Daberko, who has created images for Starbucks, Toyota, and Nordstrom, designed a scene that captures the winding hills and star. Here’s what she said about creating the piece:

“I was immediately intrigued by the contradictions of this race. On the one hand you have a crazy hard marathon and on the other a happy community surrounded by beautiful scenery. How do you capture both?

We started with a handful of sketches, which happened to look up to the Star. Then we flipped our perspective – looking down instead. The result was a much better elevation effect. By keeping the runners small relative to the environment I wanted to evoke a sense of awe.”

The second print shows the spirit of athletes and was created by London-based artist Andy Potts, who has done work for companies such as IBM, McDonald’s, and Runner’s World. Here’s what he said about creating the piece:

“I really enjoyed the challenge of combining the demands of the race with the very scenic locale. The mountains look stunning! It was fun experimenting with ways to bring the Star into the design as it’s such a unique landmark.”

Both prints will be for sale at the Race Expo on Friday, April 21 and during the Finish Festival on Saturday, April 22.  They will also be available for pre-sale at Fleet Feet Sports Roanoke starting April 12th.

The pieces were commissioned and developed by Charlottesville designer and runner, Ingmar Leliveld. Ingmar met with local runners, race influencers, and organizers for hours so that the prints would reflect the emotional connection between runners and America’s Toughest (and very beautiful) Road Marathon.